When I upgraded the machine from 11.10 Kubuntu 64-bit to 12.04, my machine essentially became unusable until I turned desktop effects off (ALT-SHIFT-F12). The story was well documented on the internet (http://www.phoronix.com/scan.php?page=news_item&px=MTA4ODQ - Good story on the failings of the 295.40 Nvidia driver that shipped with 12.04 LTS Kubuntu). I suffered along not wanting to custom a version of Kubuntu expecting Canonical to relatively quickly update the version in the repositories - after all this is an LTS version.

After 3 months of running my video on Kubuntu 12.04 by running desktop effects under the compositing type "xrender" for my Quadro NVS 210S/GeForce 6150LE graphics card instead of "OpenGL", I was fed up. Running under xrender was just as good as turning them off. I wasn't up to downgrading my drivers to the previous version or suffering through the continued development on the Nouveau drivers.  I even contemplated getting a new video card, but decided to do more digging.

I finally realized how bad it was when I did some benchmarks.

I was getting 5 FPS (frames per second) using the a Google gears script (Google Gears is not a perfect benchmark from what I read, but fine for a quick test):

I decided to take the plunge an install a third party Nvidia PPA repository, since I have had issues with direct installs of the proprietary drivers from Nvidia in the past conflicting with Ubuntu upgrades. I chose to install the x-swat repository that seemed to have a good reputation after numerous Google searches on the subject (https://launchpad.net/~ubuntu-x-swat/+archive/x-updates/). The PPA had a good reputation had been there awhile, was not on the bleeding edge, and was receiving regular updates.

You can update your drivers with x-swat ppa and to install Nvidia card latest drivers use this PPA.

To install/Update Nvidia card drivers open Terminal (Press Alt+F2 and type: konsole) and copy the following commands in the terminal:

When the driver installation completed I restart KDE (or just restart your PC). To check that things were better, I reran the script above and I'm getting ~1200 FPS with my Quadro NVS 210S / GeForce 6150LE using the 302.17 Nvidia driver.

My machine once again feels "snappy". No need to buy hardware that I don't really need, that may come with it's own set of new challenges, plus I can re-enable all the eye candy desktop effects that I'd come to appreciate in Kubuntu.

Now I just need to be careful when the next version of Kubuntu comes out. I'll be using some fine PPA purge routine to remove the XSWAT PPA (http://hackedbellini.org/applications/ppa-purge-the-best-friend-for-people-who-lives-on-bleeding-edge/).

References used to pull this together:
http://www.phoronix.com/scan.php?page=news_item&px=MTA4ODQ - Good story on the failings of the 295.40 Nvidia driver that shipped with 12.04 LTS Kubuntu
https://launchpad.net/~ubuntu-x-swat/+archive/x-updates/ - Direct link to PPA an limited information there
http://www.noobslab.com/2011/09/nvidia-drivers-for-ubuntu-1110-oneiric.html - Basic information on how to add the PPA to you list of repositories and update
http://hackedbellini.org/applications/ppa-purge-the-best-friend-for-people-who-lives-on-bleeding-edge/ - PPA purge suggestion

Is your your Moen single handle kitchen faucet hard to use or leaking around the handle? If it is you can easily lubricate or replace the 1225 cartridge in the faucet. If you're the original owner owner of the faucet Moen warrants them to be leak-free for lifetime. I called the 800 number at 1-800-289-6636 and requested a replacement cartridge kit for the faucet (think ours is model 7730). They sent it out no charge in about 10 days. If your in a hurry you can also buy it from Amazon ( Moen 1225 One-Handle Replacement Cartridge ). Our Moen 7730 Single Handle Kitchen Faucet I shot a video of the dis-assembly and re-assembly of the kitchen faucet: The kit contained everything you need to replace the cartridge and get the faucet working like new again 1225 Cartridge Repair Kit 1225 Cartridge Kit Contents Here is a link to a pdf with the Moen 1225 cartridge installation instructions that came in the kit: Here are the components in the kit: Moen 122
Read more 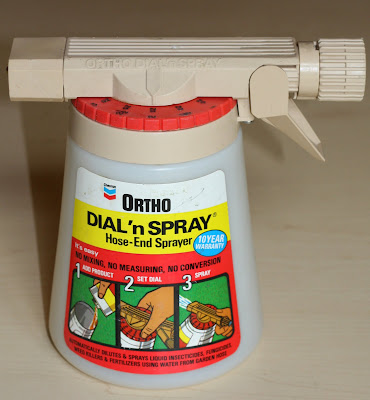 Making your own Permethrin based mosquito spray good up to 30 days – using an Orthro Dial’nSpray and 10% Permethrin solution. I had previously used a Permethrin based spray from Cutter Backyard Free to keep down the mosquitoes in our yard. We are in a heavily wooded area and the commercial Permethrin based hose spray worked well for us. It usually kept the mosquito population to almost 3-4 weeks depending on the amount of rain we had. For the most part this made our yard usable during the summer. These sprays have become difficult to buy, so I figured why not make my own. As best I can tell Permethrin properly applied is a safe mosquito reduction chemical. So I decided to make my own using commonly available Ortho Dial n spray and 10% Permethrin used for cutting down pest in animal barns. I found the 10% Permethrin for $14.44 from Amazon  or (see 8/30/2016 update below for more economical 36.8% Permethrin solution ). I just needed to figure out the proper dilution and delivery r
Read more