Showing posts from 2013
Show all

Today I picked up two Comcast Xfinity uDTA (HD Digital Transport Adapters). These are the latest DTA's from Comcast that allow you to view HDTV using a tiny cable box as opposed to the huge boxes. They also have the advantage of being much less expensive to rent than the settop boxes. In my area they are easily exchanged for the for the original Thompson DTA's (http://blog.trebacz.com/2010/03/comcast-dta-digital-transport-adapter.html) from a couple years ago.
Advantages of Comcast Xfinity HD DTA:
Small compact sizeHDMI output or standard cable TVRF remote option (no line of site needed)Same monthly rental as standard definition DTA's Disadvantages of Xfinity HD uDTA: No menu system (or extremely limited)No on-demand programmingNo channel favorites Below is the unboxing process and what it took to hook it all up.
If you'd rather see a video of the process, I did that also. You can see the video on my YouTube channel at: http://www.youtube.com/watch?v=z6tvUbli94U 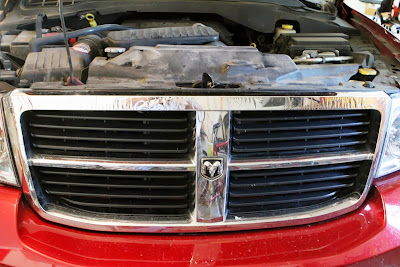 I decided to replace the failing chrome grill on my 2007 Dodge Durango. For whatever reason the chrome bubbled on the grill. You can see how wrinkled the chrome is in a couple of the pictures. It go so bad my wife noticed people looking at the car when it was parked -think the front end had gotten hit. The are many rumors on the internet why the chrome lifts off the plastic on the grille (cold temperature, rock pinholes, etc). My estimation is that the chrome expands and the plastic shrinks over time. Either way I decided to replace it and document it in this blog post.

Right Side Showing Grill Chrome Wrinkling
Left Side of Grill Showing Durango Chrome Bubbles I didn't expect the process of replacing the Durango grill to be tough, but there are a few covers covering up the bolts to replace the grill. First I pried up the black plastic cover in the picture below. There were 4 plastic plugs holding the front of it down.
After prying up the plugs with a screw driver I could lift up …
2 comments
Read more

I'm always looking for way to save money and decided to focus on a big energy abuser in our household - for this blog post - our dehumidifier during the summer time. My problem is an old inefficient dehumidifier combined with summertime energy price spikes from the real time pricing program (RRTP) with ComEd.

Background:
We had a dehumidifier that was almost 20 years old. It still "worked", but was really bad at reliably removing moisture from our basement. It had gotten to the point where it would run 24/7 constantly, freeze up from time to time, and remove moisture at a slow rate. I had to empty the bucket about every 4 days. My target moisture level in our dry basement was 45%, but that unit would only keep it about 55%.

We recently joined ComEd's real time electricity pricing program and have saved a lot of money (http://blog.trebacz.com/2013/03/comed-electrical-rrtp-savings-program-6.html). I knew that a 24/7 dehumidifier (essentially small air conditioner) was p…
Post a Comment
Read more

May 12, 2013
I had the main system drive on my 5 year old Kubuntu machine start having read errors in the syslog reported by logcheck. I had the system up and running straight for those 5 years and it was likely nearing the drives lifetime. I didn't want to have to rebuild the system from scratch, since it had served me well -just wanted to get a little more reliable disk drive in place (with a minimal amount of hassle).

The drive I was replacing was a  250GB 7200 rpm SATA drive. I had an extra 500GB 7200 rpm Western Digital Black drive that had been a warranty repair. It had been gently used in a machine that needed more space. It was a perfect donor for the Kubuntu machine. It was currently mounted in a Rosewill USB external hard drive enclosure (http://www.amazon.com/gp/product/B005KGNXTE/). 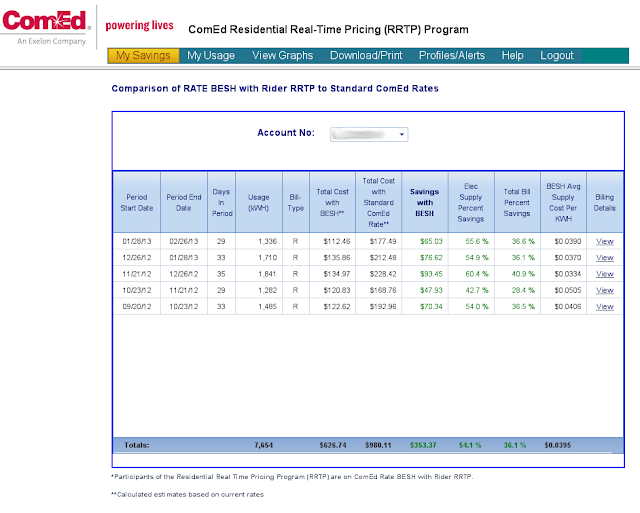 I've been on the Chicago area Commonwealth Edison RRTP (Residential Real Time Pricing Program) for about 6 months. I've been extremely happy with the savings that we have seen on the program. I blogged about the setup and equipment a couple months ago in this blog post (http://blog.trebacz.com/2012/10/comed-residentipricing-rrtp-program.html). That blog post show what the equipment, installation time, and billing cycle look like.

Now I wanted to share what the savings look like to my house in just 6 months with the program. Conveniently ComEd has a referral program. They sent me an email with my savings and encouraging me to tell my friends (in turn I get a $20 credit for each person who mentions my name when they sign up). So here it is (in ComEd's words).

Hi, I’ve been taking control of my electricity bills with an innovative program called ComEd Residential Real-Time Pricing (ComEd.com/RRTP).  This program is special because rather than paying a fixed price, you pay th…
6 comments
Read more 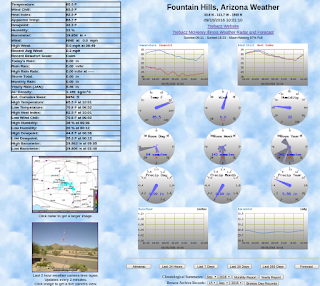 I've finished getting it set up and running. I really like the software. The only thing I haven't seen addressed is the verbosity of the logging. Wview has great capabilities to enable a disable logging from the GUI (see online manual http://www.wviewweather.com/release-notes/wview-User-Manual.html#Configuration-wviewmgmt-services). I found this invaluable when originally setting up my Ubuntu system, but have turned all the configurable logging off.

I'm currently getting a few to many logcheck alerts each day from the server. I run logcheck at the "server" level (sudo nano /etc/logcheck/logcheck.conf configuration line set to REPORTLEVEL="server") to keep track of anything out of the ordinary on the server.